Carl Icahn: Where Did He Go Wrong as Special Advisor for Regulatory Reform?

Hubris, thy name is Carl Icahn.

In his letter of resignation, Icahn attributed his decision, in part, to the “recent appointment of Neomi Rao as Administrator of the Office of Information and Regulatory Affairs (or ‘regulatory czar’, as the press has dubbed her).” Yet, Icahn’s resignation was more likely driven by his frustration at having having failed to get Trump to sign into law a single regulatory reform that would have been benefited one of Icahn’s largest investments.

How could this happen? To an ‘icon of activist investing’? To someone who sat in the proverbial “catbird’s seat?”

TRUMP PRESIDENCY A POTENTIAL BOON FOR REGULATORY REFORM IN ENERGY.    Carl Icahn, a frequent critic of regulation and a major fossil fuel investor, was an early supporter of Trump's presidential bid. To reward Icahn's support, Trump appointed him as a special advisor, noting that Icahn's "help on the strangling regulations that our country is faced with will be invaluable." Icahn echoed those sentiments, noting that "regulatory reform will be a critical component of making America work again."

Maybe so, but as it turned out, Icahn seemed to focus his attention on a single area of regulatory reform - relating to the energy sector. And he uncharacteristically failed to succeed in that endeavor.

Perhaps no publicly-traded company benefited from Donald Trump’s election and Icahn’s appointment as much as CVR Energy (stock symbol 'CVI'), whose share price nearly doubled by December 30, 2016. [See chart below: on 11//8, CVI closed at $12.79; on 12/30, it closed at $25.39.] Icahn, who owned 82% of the oil refiner, profited enormously. By way of example, on the day after his appointment, CVI shares soared 10.%5, giving Icahn nearly $160 million in paper gains on his CVR Energy holdings. 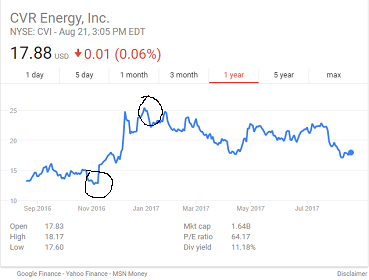 The meteoric rise in CVR Energy’s share price was based on the market’s expectation that Icahn would get Trump to adopt new rules that would shift the cost of processing crude oil to oil retailers from the refiners, including CVR Energy. Those rules currently require refiners to blend (renewable) ethanol into gasoline, or pay for renewable-fuel credits if they don't. Icahn wanted to change the "point of obligation" so that fuel retailers – rather than oil refiners - would have to pay for those credits.

As noted above, that rule change was possibly the one regulatory reform issue that Icahn actually worked on. In the end, Icahn's lobbying didn't work, and the 'point of obligation' was never changed - though it almost worked.

According to Matt Levine, in his BloombergView Money Stuff column, around the time when Trump was showcasing the signing of Executive Orders, Icahn tried to drafted a rather poorly-written executive order that was blocked by key players in the Trump administration - i.e., Gary Cohn and Mike Catanzaro. The pair supposedly viewed Icahn’s efforts as an attempt to hijack the policy process. The drafted executive order was “taken off the table” and never presented for Trump’s signature.

FINANCIALISH TAKE AWAY.    Carl Icahn may have had a valid argument for obligating oil retailers to pay for the renewable credits. Yet, we'll never know, unless and until someone else brings up the matter in Washington. More central to this scenario, however, is our need to understand what issues or reasons led to Icahn's monumental failure. How was it possible that this billionaire and wildly-successful activist investor failed in a mission when he was primed for success?

One thought is that Carl Icahn was deceived by his own perception of self-importance or hubris. Convinced that regulatory reform was a "fait accompli," Carl Icahn simply showed up thinking that he need to expend any significant effort to ensure its passage. In some ways, such an attitude mirrors Donald Trump's involvement with Healthcare Reform - where Trump never stepped up to the podium to expound upon the reasons for its passage.

Alternatively, Icahn's lack of inexperience in Washington protocol may have blinded him to the complexities associated with regulatory reform. All that one needed to do was present a half-baked draft of the rule change and let the 'wonks' tighten up the wording. Such a naive or sophomoric approach seems to mirror another of Trump's defeats - namely, his first executive order banning immigration.

Whoever thought politics could be so complicated?

That said, let's close this posting with some positives. First, the Trump administration and the country have more important issues to deal with. Second, it's someshat comforting to know we've got one less 'conflict of interest' to grapple with.