Chicago Cubs Turn Back the Clock by 'Turning the Other Cheek'

Steve Bartman, who expressed his appreciation for being reunited with the Cubs family, said: "I am hopeful this ring gesture will be the start of an important healing and reconciliation process for all involved."

The Chicago Cubs, which ended a 108-year drought by winning the 2016 World Series, awarded an official World Series ring to Steve Bartman. The ring - similar to the one given to many staff members (not the one given to players) - was presented in owner Tom Ricketts' office at Wrigley Field.

"On behalf of the entire Chicago Cubs organization, we are honored to present a 2016 World Series Championship Ring to Mr. Steve Bartman. We hope this provides closure on an unfortunate chapter of the story that has perpetuated throughout our quest to win a long-awaited World Series.

The "unfortunate chapter" to which Ricketts was referring occurred in the 8th inning of Game 6 of the 2003 NLCS (National League Championship Series). Baseball fans will remember the moment well.

The Cubs were poised to go to the World Series that year – all they had to do was win Game 6, which they were leading with 2 outs in the 8th inning. A foul pop fly to left field seemed like a sure out to end the inning, until Steve Bartman reached out from his front row seat and deflected the ball away from left fielder Moises Alou. As the 8th inning continued, the Cubs lost the lead, then the game. The next day, the Chicago Cubs went on to lose Game 7 of the NLCS, thereby shutting out their hopes to play and win that year’s World Series.

Since that day in September 2003, Steve Barton has endured taunts, death threats and unthinkable disparaging treatment. That is what makes the ring gesture by the Chicago Cub so remarkable. In his prepared remarks, Steve Bartman expressed his appreciation for the Cubs organization, and added the following words of hope and prayer: 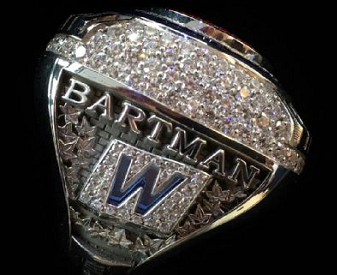 "I humbly receive  the ring not only as a symbol of one of the most historic achievements in sports, but as an important reminder for how we should treat each other in today's society. My hope is that we all can learn from my experience to view sports as entertainment and prevent harsh scapegoating, and to challenge the media and opportunistic profiteers to conduct business ethically by respecting personal privacy rights and not exploit any individual to advance their own self-interest or economic gain.

Moreover, I am hopeful this ring gesture will be the start of an important healing and reconciliation process for all involved. To that end, I request the media please respect my privacy, and the privacy of my family. I will not participate in interviews or further public statements at this time.

I am happy to be reunited with the Cubs family and positively moving forward with my life."