Goldman Sachs CEO Lloyd Blankfein posted his first tweet on 6/1/17. That’s 132 days after Donald Trump’s inauguration and 4,087 days after Jack Dorsey posted the first-ever tweet (3/21/06). Since then, Blankfein has posted 5 other tweets.

While telling "Mad Money” host Jim Cramer that he has a natural penchant for expressing his opinion on hot-button issues – particularly on those involving banks - Mr. Blankfein gave 2 basic reasons for tweeting:

"It has to fall in, for my mind, in one of a couple of categories. Either it's something that's kind of in our wheelhouse of expertise. So I commented it would be very, very bad to let the U.S. government default – that's in our wheelhouse. Before Twitter, I did those things by press release. The other thing I'll comment on is when things really affect the ability of our people to be who they are and to do their job and to be effective as professionals."

Here are Lloyd’s Blankfein’s 6 tweets, pulled down from twitter.com: 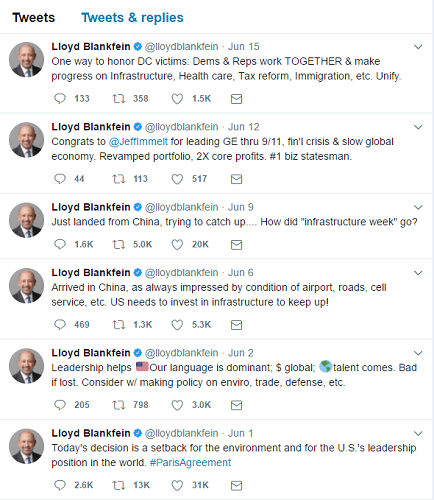