Madoff 'Cooked the Books' to Appease His Narcissistic Pleasures

NYPost reporter Richard Morgan would have you believe that Bernie Madoff committed his Ponzi scheme because he "wanted to please everyone." And how does he know that? Because the Ponzi king said during 2 days of deposition in April that he has “nothing to lose now.”

For me, I'd prefer to believe that Bernie was obsessed with his appearance and importance, though he had the foresight to come out looking good rather than great, in order to avoid unnecessary inspection. Let Bernie's actions speak for themselves:

BERNIE, THE GOLFER.  Between 1998 and 2000, Madoff registered 20 scores from games played at the Palm Beach Country Club, the Atlantic Golf Club and the Fresh Meadow Country Club - even with jsut one outing in 1999. Yet, see how eerily consistent he was while averaging a handlcap of 12 - about the same return he guaranteed investors. [NYTimes] 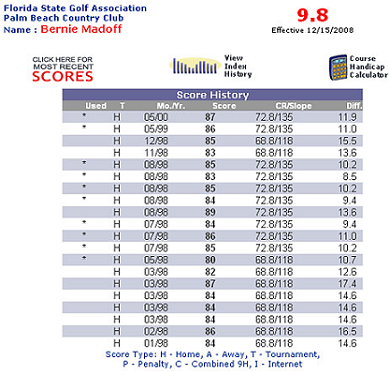 BERNIE, THE MARKET MAKER.   Bernie funneled tremendous amounts of money into his broker-dealer, which engaged in market-making and proprietary trading - the "legitimate” side of his business. The money was spent on the cutting-edge technology, which few firms (especially small firms) could afford. In 2009, federal prosecutors charges Madoff with having directed the transfer of $250 million from investment advisory clients' funds to his market making and proprietary trading businesses. Those transfers, through his London business, gave the false appearance that he was conducting transactions in Europe on behalf of investors, the U.S. said. [InvestmentNews]

A 2001 blog by Michael Ocrant that I just came across, highlights the recognition that Bernie so eagerly sought. Mr. Ocrant also reports how skeptical investment professionals are of Madoff's eerily consistent  returns. [NakedShorts/Typepad]

Madoff Securities, with its 600 major brokerage clients, is ranked as one of the top three market makers in Nasdaq stocks, cites itself as probably the largest source of order flow for New York Stock Exchange-listed securities, and remains a huge player in the trading of preferred, convertible and other specialized securities instruments.

Beyond that, Madoff operates one of the most successful “third markets” for trading equities after regular exchange hours, and is an active market maker in the European and Asian equity markets. And with a group of partners, it is leading an effort and developing the technology for a new electronic auction market trading system called Primex.

And all this arose from a modest beginning.  [wikipedia]

Initially, the firm made markets (quoted bid and ask prices) via the National Quotation Bureau's Pink Sheets. In order to compete with firms that were members of the NYSE trading on the stock exchange's floor, his firm began using innovative computer information technology to disseminate its quotes. After a trial run, the technology that the firm helped to develop became the NASDAQ.

The firm functioned as a third-market provider, bypassing exchange specialist firms by directly executing orders over the counter from retail brokers.At one point, Madoff Securities was the largest market maker at the NASDAQ, and in 2008 was the sixth-largest market maker on Wall Street.

BERNIE THE INDUSTRY LEADER.   Madoff was active in the National Association of Securities Dealers (NASD), and he served as chairman of its board of directors, and was a member of its board of governors. And, members of the Madoff family served as leaders of SIFMA, while Bernie served on the board of directors of the SIA, a precursor of SIFMA, and was chairman of its trading committee.[He also was a founding board member of the DTCC subsidiary in London, the International Securities Clearing Corporation.[wikipedia]

One writer even noted Madoff's enormous influence with many of the SEC rules governing market makers.  [siliconinvestor.com]

For example, he was the principal author of an SEC rule that exempted market makers from various regulations governing short sellers. That rule ensured that market makers - including Madoff - could, among other things, engage in so-called “naked short selling.”

At any rate, I don’t think Madoff had an office at the SEC. He certainly was not employed there. But the SEC was glad to have Madoff write a rule exempting Madoff from the rules. The formal name of the rule is, “the option market maker exception to Rule 203(b)1,” but the SEC was so thankful that it named the rule after the great man himself. It was called, “The Madoff Exception.”