New York City is reputed to be cold, disconnected and dirty. To some extent that is true. But there's an underlying bond of humanity, pride and unity that rises above the fray - particularly when New Yorkers feel threatened. Here's one example where the best of the city was demonstrated

On Saturday night, New York based-lawyer Gregory Locke reported in a post on Facebook that, earlier in the night, he had entered a New York City subway car with advertisements covered in Nazi imagery. After a moment of uncomfortable silence, a fellow passenger took action.

"One guy got up and said, 'Hand sanitizer gets rid of Sharpie. We need alcohol.' He found some tissues and got to work," Locke wrote. Other passengers quickly joined in, with tissues and hand sanitizer of their own. According to Locke, within two minutes all of the graffiti had been cleaned away.

"'I guess this is Trump's America,' said one passenger," Locke wrote. "No sir, it's not. Not tonight and not ever. Not as long as stubborn New Yorkers have anything to say about it." 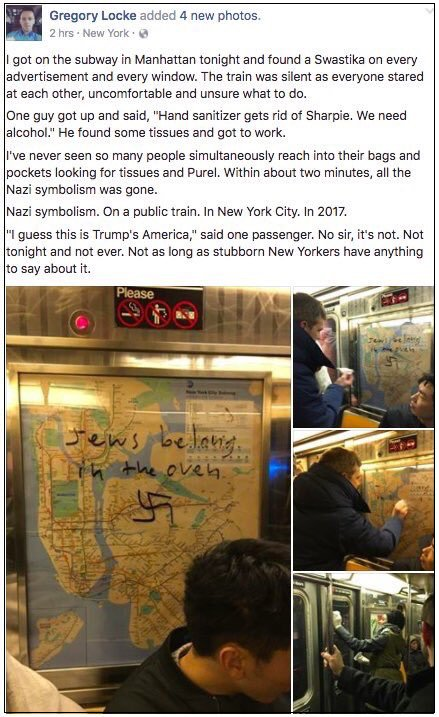