The Crypto Market Giveth, Then It Taketh Away

Today’s CNBC headline read, Cryptocurrencies shed $10 billion in an hour on worries over ‘stablecoin’ tether. That was incentive enough for me to look back at recent postings for instances of market volatility in the cryptocurrencies markets.

And sure enough, there was my Financialish post on April 5, Bitcoins: While You Were Sleeping, which reported that Bitcoin rose 26% over a 17-hour period on April 2. Over that same period, Ethereum (the #2 cryptocurrency in market cap terms) had jumped 25%.

According to CNBC, yesterday's crypto markets were spooked over regulatory worries after the New York Attorney General accused Bitfinex (a bitcoin exchange operator) and Tether Limited (a Tether issuer) of hiding an $850 million loss. Seems that Bitfinex used at least $700 million from Tether’s cash reserves to cover up the apparent loss of client and corporate funds.

The news caused the price of Bitcoin to fall 4% over a 24-hour period – though that loss is barely noticeable since the market price of Bitcoin has risen 5.5% over the past 3 weeks - contrary to the significant losses experienced by 12 of the 14 largest cryptocurrencies over that same period - as per the following chart.] 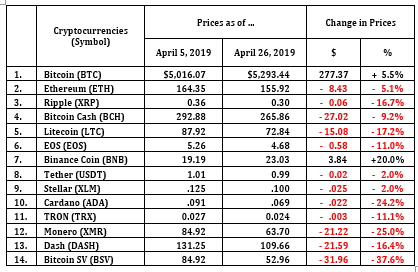 That said, if you’re invested in the crypto markets, wear your crash helmets and keep your seat belts fastened. And, if you're a light sleeper, have those sleeping aids handy. The bumpy ride continues.